What Is Synesthesia And What's It Like to Have It?

I know that the number four is yellow, but I have a friend who insists four is red. 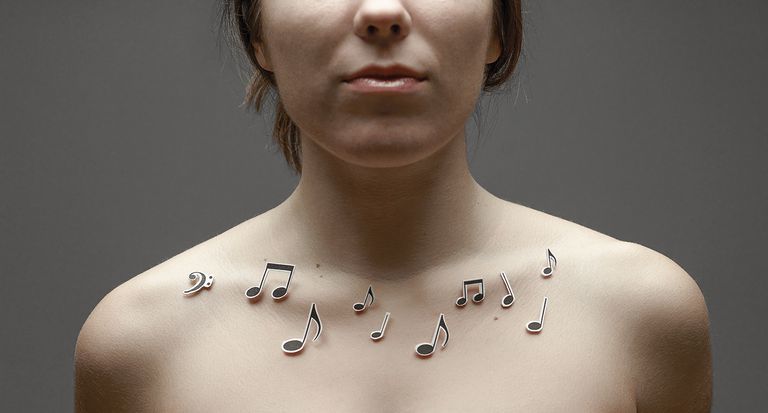 She also says four has a motherly personality, but my four has no personality — none of my numbers do. But all of my numbers have colors, and so do my letters, days, and months. My friend and I both have synesthesia, a perceptual condition in which the stimulation of one sense triggers an automatic, involuntary experience in another sense. 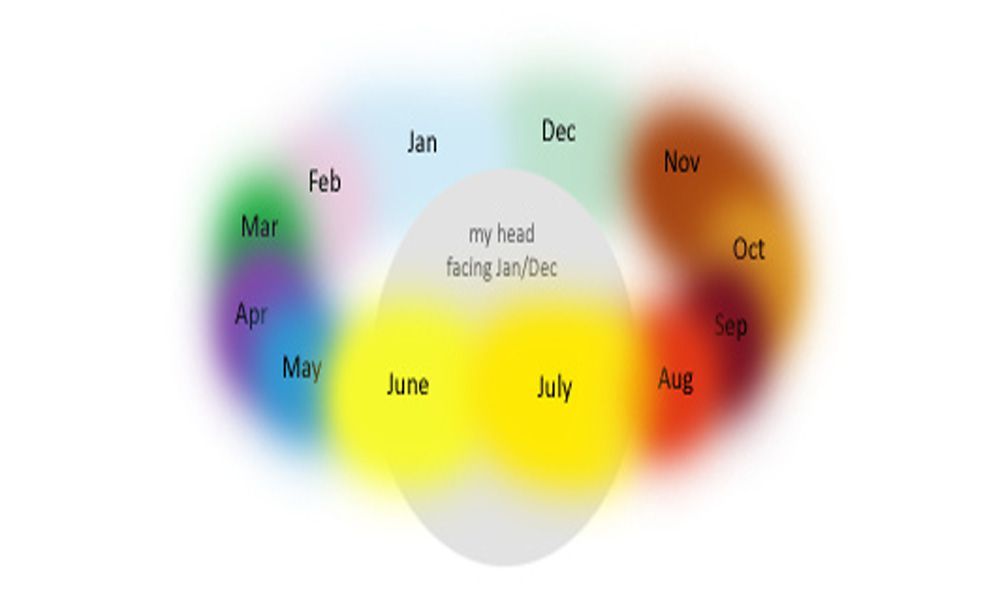 Synesthetes — or people who have synesthesia — may see sounds, taste words, or feel a sensation on their skin when they smell certain scents. They may also see abstract concepts like time projected in the space around them, like the image on the right.

Many synesthetes experience more than one form of the condition. For example, my friend and I both have grapheme-color synesthesia — numbers and letters trigger a color experience, even though my experience differs from hers.

Because her numbers have personalities, she also has a form of synesthesia known as ordinal-linguistic personification.

Scientists used to think synesthesia was quite rare, but they now think up to 4% of the population has some form of the condition. 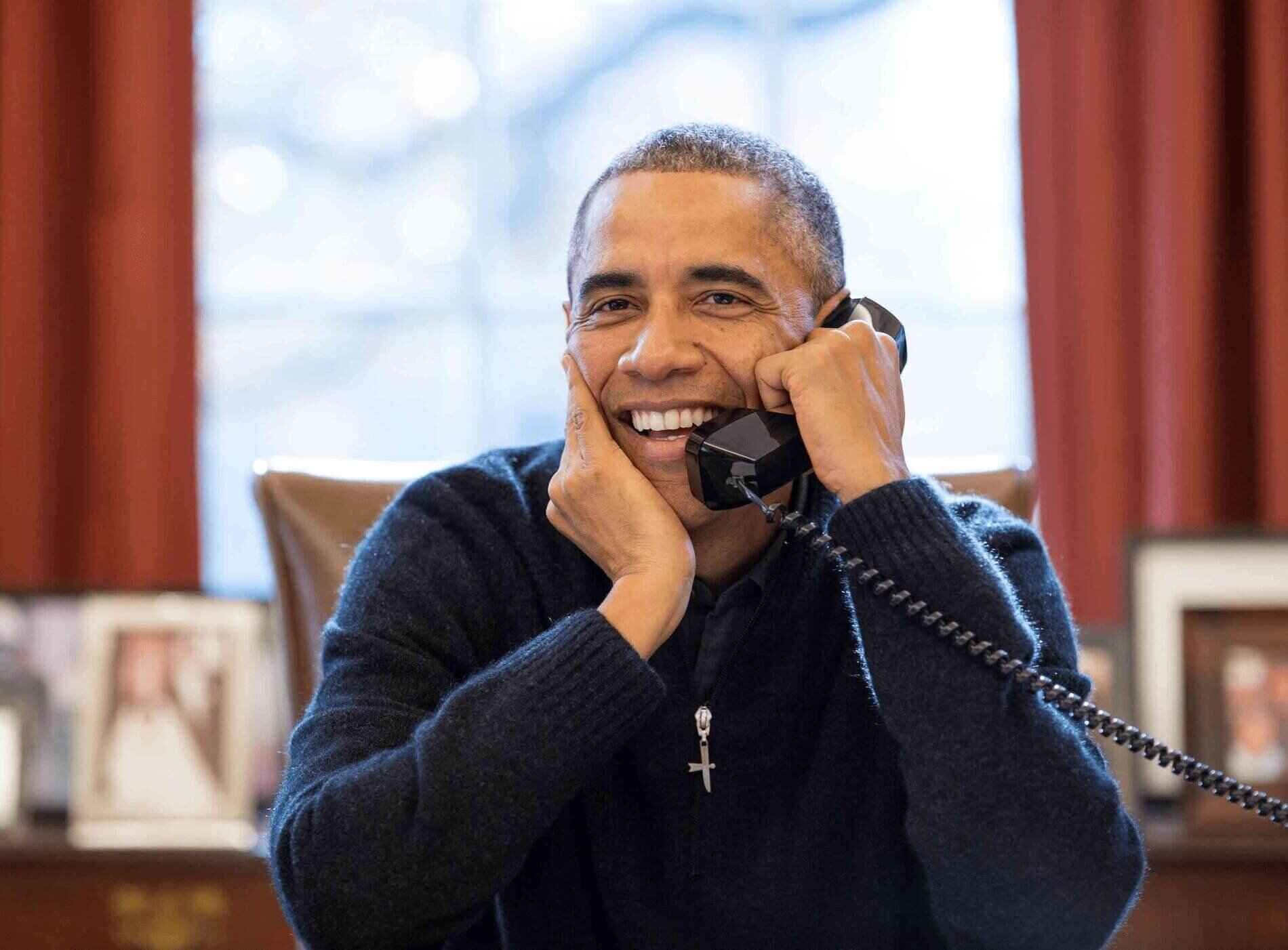 David Eagleman, a neuroscientist, and director of the Laboratory for Perception and Action at the Baylor College of Medicine, isn't a synesthete, but he often uses this analogy to explain the phenomenon.

When you see the photo above, you likely think "President Barack Obama" even though those words aren't written anywhere on the picture. Your brain automatically and involuntarily makes that connection, much like my brain makes a connection between the number four and the color yellow.

"It's not the same as a hallucination," Eagleman explains in the documentary "Red Mondays and Gemstone Jalapenos." "It's not actually interfering with their ability to see, so in that same way, you could picture a giant orange pumpkin sitting in front of you, but that doesn't prevent you from seeing through that and past that."

Synesthesia is a sensory phenomenon that's unrelated to memory, so if you're not a synesthete, you could teach yourself to associate a color with a certain number for example, but your brain wouldn't respond the same way synesthetes would. 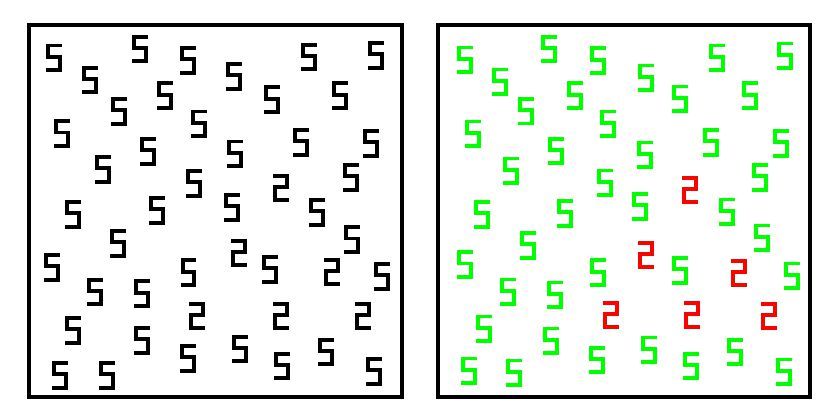 For instance, someone without grapheme-color synesthesia would have a more difficult time picking out the black twos from the black fives in the image on the right. However, if your numbers have colors, you'll see the triangle of twos almost instantly. But this task may be even easier for some grapheme-color synesthetes. Daniel Smilek, a psychology professor at the University of Waterloo, has identified two groups of synesthetes among those who associate colors with letters and numbers. There are projectors, those whose colors fill the printed letter in front of them, and associators who see the colors in their mind's eye, as I do.

What about people who can hear silent videos?

Synesthesia doesn't just apply to people who associate certain colors with images. Some people have the ability to hear sounds in videos when there is actually no sound being played.

Psychologist Chris Fassnidge calls this phenomenon "visually evoked auditory response" (vEAR). While it's technically not synesthesia, Fassnidge believes it's a new form that warrants further study. "Some people describe it as a buzzing sound in their head," Fassnidge told Vox. "For other people, it’s kind of like white noise. And then other people say it varies depending on what it is they are looking at."

A 2008 study in Current Biology suggests that vEAR is fairly common — affecting 20 to 30 percent of people — and many people may not realize they are associating faint sounds with imagery.

"A lot of people don’t realize they have this thing until you start testing for it in the laboratory,” Fassnidge said. "Maybe because they co-occur so frequently you either aren’t aware of the mental sound until you strip away everything else."

About 40 percent of synesthetes have a first-degree relative with synesthesia, and many synesthetes recall having synesthesia for as long as they can remember.

"I was definitely playing with it when I was 5 or 6 years old because I remember raiding my parents' record cabinet, searching for records that I liked to listen to for colors," said Sean Day, a synesthete who associates colors with both sounds and tastes.

A 2018 study in Proceedings of the National Academy of Sciences conducted by scientists from the Max Planck Institute for Psycholinguistics and the University of Cambridge analyzed DNA samples from several families who have multiple generations of synesthetes. They concluded that while the families differed in DNA variations, there was one commonality: There was an enhancement of genes involved in cell migration and axonogenesis, a process that enables brain cells to wire up to their correct partners.

"This research is revealing how genetic variation can modify our sensory experiences, potentially via altered connectivity in the brain," Professor Simon Baron-Cohen stated in the study. "Synesthesia is a clear example of neurodiversity which we should respect and celebrate."

Other experts believe everyone may be born with the ability to experience synesthesia. Daphne Maurer, a psychologist at McMaster University, has speculated that all of us may be born with the neural connections that allow synesthesia, but that most of us lose those connections as we grow. Eagleman acknowledges there may be synesthetic correspondences in the brains of non-synesthetes, but that people are unaware of them until they're teased out. 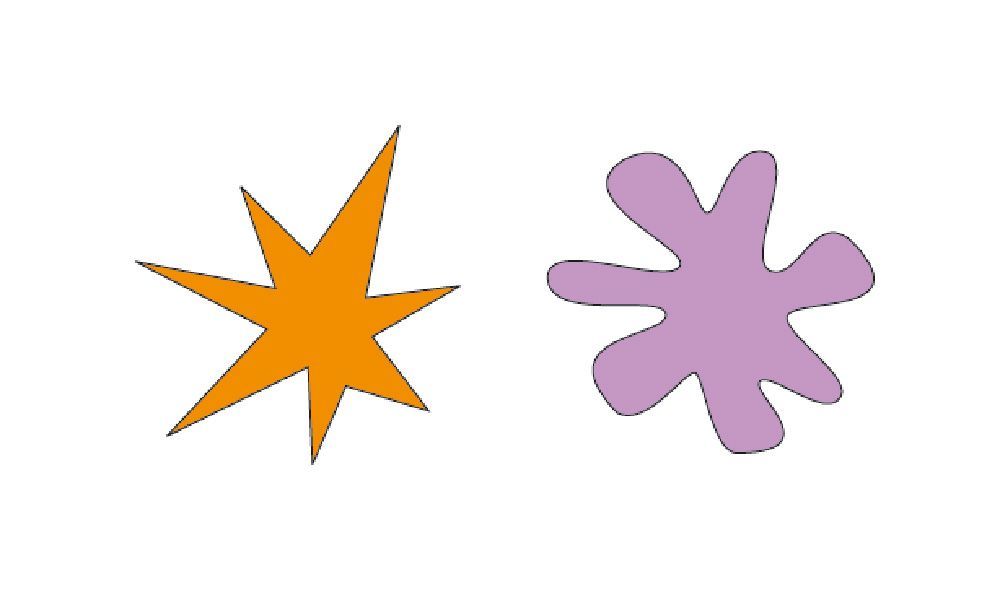 He points to something called the bouba/kiki effect as an example. When asked to choose which of two shapes on the right is named "bouba" and which is "kiki," most people choose kiki for the angular shape and bouba for the rounded one. Research also shows that people are likely to say that louder tones are brighter than soft ones and that darker liquids smell stronger than lighter ones. In his book, "Wednesday Is Indigo Blue," Eagleman says these examples prove that these analogies are actually "pre-existing relationships." "In this way, synesthetic associations our ancestors established long ago grew into the more abstract expressions we know today — and this is why metaphors make sense," he writes. However, synesthesia differs from these examples in that the sensory experience triggered is automatic and unlearned, making it different from metaphorical thinking.

"It's a genuine phenomenon, and people who have it are actually experiencing the world differently," Eagleman said.

How is it tested? 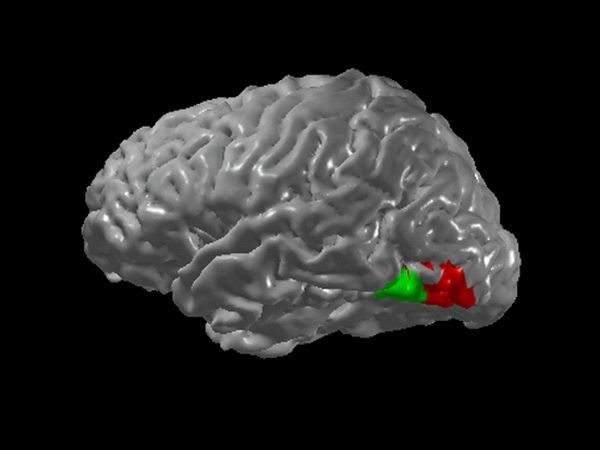 Consistency is one of the best ways to test for synesthesia.

"If you tell me that your letter 'J' is a very particular shade of powder blue ... I can test you on that and have you identify exactly the shade that best matches," Eagleman said. "If you're just being poetic or metaphorical or making something up, then you can't capture those colors again. But if you're really synesthetic, then you'll be able to pick exactly those colors out years later." Researchers are taking this approach to look at synesthetes' brains. Using positron-emission tomography and functional magnetic resonance imaging, they've found that people who report seeing colors in music, for example, have increased activation in the visual areas of the brain in response to sound. Pictured above, for example, are the regions of the brain that are thought to be cross-activated in grapheme-color synesthesia.

The pros and cons

Some synesthetes say their condition can be uncomfortable at times. For example, seeing words printed in the wrong color can be strange, or certain names may taste bad to a synesthete. Others report suffering sensory overload or feeling embarrassed at a young age when they describe experiences they didn't know were atypical.

However, most synesthetes think of their abilities as a gift and wouldn't want to lose them. "You've experienced extremely unpleasant odors," Day points out. "Do you want to permanently lose your sense of smell?" 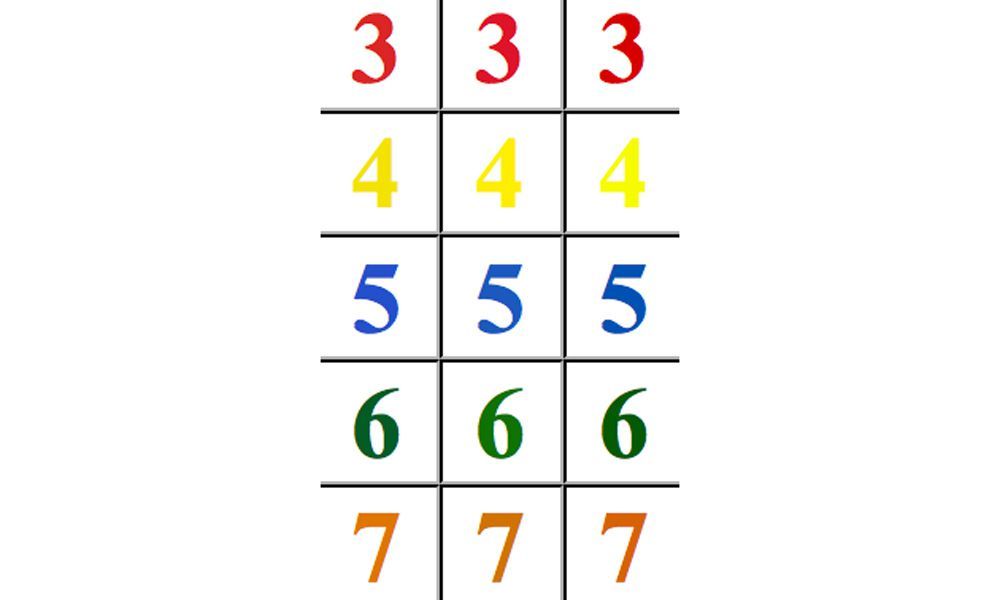 There may also be some benefits to being a synesthete, such as an ability to discern similar colors and easily memorize information. For example, I might not remember a digit in a phone number, but I'll have an impression of green and therefore know the mystery number is six. (Some of my numbers are pictured above, as depicted by the Synesthesia Battery.)

In 2005, Daniel Tammet set the European record for pi memorization by memorizing 22,514 digits in five hours. He attributed the feat to his ability to see numbers with color, texture and sound. There's also evidence that synesthesia may enhance creativity. A 2004 study at the University of California had a group of students take the Torrance Tests of Creative Thinking. The synesthetes who took the test scored more than twice as high in every category. In some instances, the neurological condition has even led to unique job opportunities. Some car manufacturers, for example, are hiring synesthetes to help designers create cars that are more pleasing to potential drivers. And synesthetes keep good company. The list of known synesthetes is long and includes Vladimir Nabokov, Vincent Van Gogh, Marilyn Monroe, Billy Joel and Mary J. Blige. Musician Pharrell Williams associates music with colors and says he can't imagine life without this "gift."

"If it was taken from me suddenly I'm not sure that I could make music," he told Psychology Today. "I wouldn't be able to keep up with it. I wouldn't have a measure to understand."

If you think you may be a synesthete, you can take the Synesthesia Battery created by Eagleman's lab. For a different approach, you can look at What Color is Your Name, a site created by a grapheme-color synesthete named Bernadette who started the project to help explain how her brain responds when she learns someone's name.